It has been an honor these past several years to work with guardians and stakeholders across the state of North Carolina as we ‘rethink’ how guardianship can be reformed to better meet the needs of those we serve. While we have been guided and inspired by national and state trends, I was eager to learn about how other countries were ‘rethinking’ their systems.  Every other year the World Congress provides a forum for such exchange.

In June I boarded a plane for Edinburgh to attend the 7th World Congress on Adult Capacity (formerly called Guardianship).  I was one of nearly 300 delegates who came from 30 countries across the globe.

In addition to the numerous sessions, it was inspiring to meet and exchange ideas with fellow delegates at tea and shortbread breaks, or in pubs on the Royal Mile below the magnificent castle. There was a notable buzz and excitement throughout about progress being made to improve policies and practices.

Clearly, the world is in the midst of radical guardianship reform.  The basis for much of the change is United Nations Convention on the Rights of Persons with Disabilities (CRPD).  Article 12 recognizes that all persons with disabilities have the right to recognition as persons before the law, and that they enjoy legal capacity on an equal basis with others.  Though many initiatives in the U.S. are working in this direction, we are one of only a handful of countries that have not signed on to this declaration.

Presentations highlighted how countries are forgoing a paternalistic approach and taking steps to end discrimination in favor of and ensuring that wishes and rights of the person are honored.  Terms like guardianship, ward, and incapacity are gone.  Rights to marry, make a will, and vote are maintained.

As we rethink guardianship in policy and practice in North Carolina, I invite you to reflect on the principles that are guiding changes around the world.

Many sessions highlighted how various countries were incorporating practices to enhance dignity while respecting the person’s rights and preferences. Supportive decision making was a common tool.  Here are a few examples.

Germany threw out its guardianship system in 1992 and came up with the concept of a Betreuer, a person who must fulfill the wishes and preferences of the adult and adhere to the right of self-determination. A betreuer may not be appointed against the will of an adult and the concerned adult has the right to refuse a court-appointed betreuer or any specific person. The concept of ‘best interest’ is removed and a betreuer is never permanent.

Appointment of a betreuer in all matters is inadmissible.  The court must examine the scope and support needed in a person-centered manner. The adult maintains legal standing.

Ireland, like many countries, has abolished the concept of substituted decision making.   ‘Incapacitation’ is no longer used in Spain. Rather, assistance and support are provided so that a person can attend to their own affairs and exercise their rights.  Though the adult has a right to support, it is voluntary. Japan no longer takes away the right to self-determination.  POA’s (Power of Attorney) are more common than guardianship.

As Elizabeth Moran, Senior Attorney/Chief Counsel, American Bar Association Commission on Law and Aging, concluded after attending the conference, the U.S. has fallen behind and is out of step with our global neighbors.  Though we are moving forward, the time for change, enduring change, is now.…and indeed, the world is watching.

I returned with renewed dedication and commitment to collaborating with others as we take steps to enhance the dignity and rights of others. We all have a part to play in this important work. The next Congress will be in Buenos Aires in 2024. Perhaps we will take the stage to showcase our efforts at Rethinking Guardianship NC! 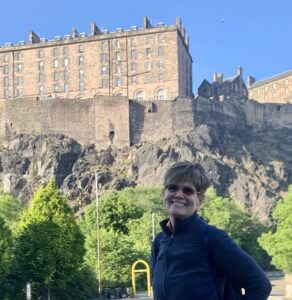 Carol Kelly, Ph.D. is a member of the Rethinking Guardianship initiative and has participated on  the statute writing team.  Currently she works with the NC Guardianship Board, planning educational opportunities.  After working as a school psychologist, Carol served as a school principal and adjunct professor.  Guardianship reform advocacy is a passion.

One Response to “Guardianship Reform: A Worldwide Revolution — Reflections from the World Congress in Edinburgh”